In my review for Parker: the Hunter I wondered whether or not Cooke was going to let loose in his second Parker adaptation The Outfit much like Parker lets loose after a job. Having read The Outfit for the first time, I would say Cooke indeed let loose. Once again the plot is simple. It also seems Cooke was less faithful with his adaptation this go around. Taking a free hand with The Outfit was a good call by Cooke as I enjoyed the second comic more than I did the first which was excellent. I essentially only have one complaint which is the way Cooke draws women.

Now this was a bigger problem in The Hunter but I forgot to mention it. Essentially, all his women look the same. Same body type, same face, all he seems to do is change the hairdos. He adds more variety in the second comic notably with Alma and the retired-prostitute-turned-motel-owner.

We get larger woman in her forties and an elderly lady in her sixties. It was nice of Cooke to avoid giving us nothing but magazine worthy babes which, incidentally he does very well but it gets tiresome after a while. The colour palette is similar and it keeps it consistent with The Hunter.

The main difference is the blue-grey from the first book is now a darker blue.

Just a slight difference but it was nice. It also gave it a darker feel which suits The Outfit just fine. Block argues that novelists are generally "uncomfortable writing consistently from an antisocial perspective", and tend to soften such characters over time. However, "[Parker] never turns honest, or finds God, or starts working as a secret agent for the government. But Nussbaum also identifies two critical elements that make Parker a sympathetic protagonist : first, he is surrounded by criminals even more ruthless than him, and second while Parker is capable of using violence he rarely if ever initiates violence except in self-defense.

While in 's The Handle Parker's age is explicitly stated to be 38, Parker is, essentially, an ageless character — in the various Parker novels that were written and take place over a span of 45 years, Parker always appears to be somewhere around Physically, Parker is described in the opening paragraphs of The Hunter as "big and shaggy, with flat square shoulders His hands, swinging curve-fingered at his sides, looked like they were molded of brown clay by a sculptor who thought big and liked veins.

His hair was brown and dry and dead, blowing around his head like a poor toupee about to fly loose. His face was a chipped chunk of concrete, with eyes of flawed onyx. His mouth was a quick stroke, bloodless. Never once have I caught him winking at the reader. In terms of his interactions with others, Parker dislikes small talk, and has little use for social pleasantries. Instead, he prefers to converse as little as possible, and will end conversations abruptly once he feels that he has obtained the information he requires.

Parker has few interests outside his work, and when he is planning or executing a heist, he is focused on it to the exclusion of almost everything else. However, once the heist is complete, Parker has an almost overwhelming desire to have sex. Though he has a wide range of professional contacts, Parker has no friends. His first name is never revealed in the series, a decision Westlake has stated he made when thinking that The Hunter would be a standalone book and which he stuck to even though it complicated writing the subsequent books. 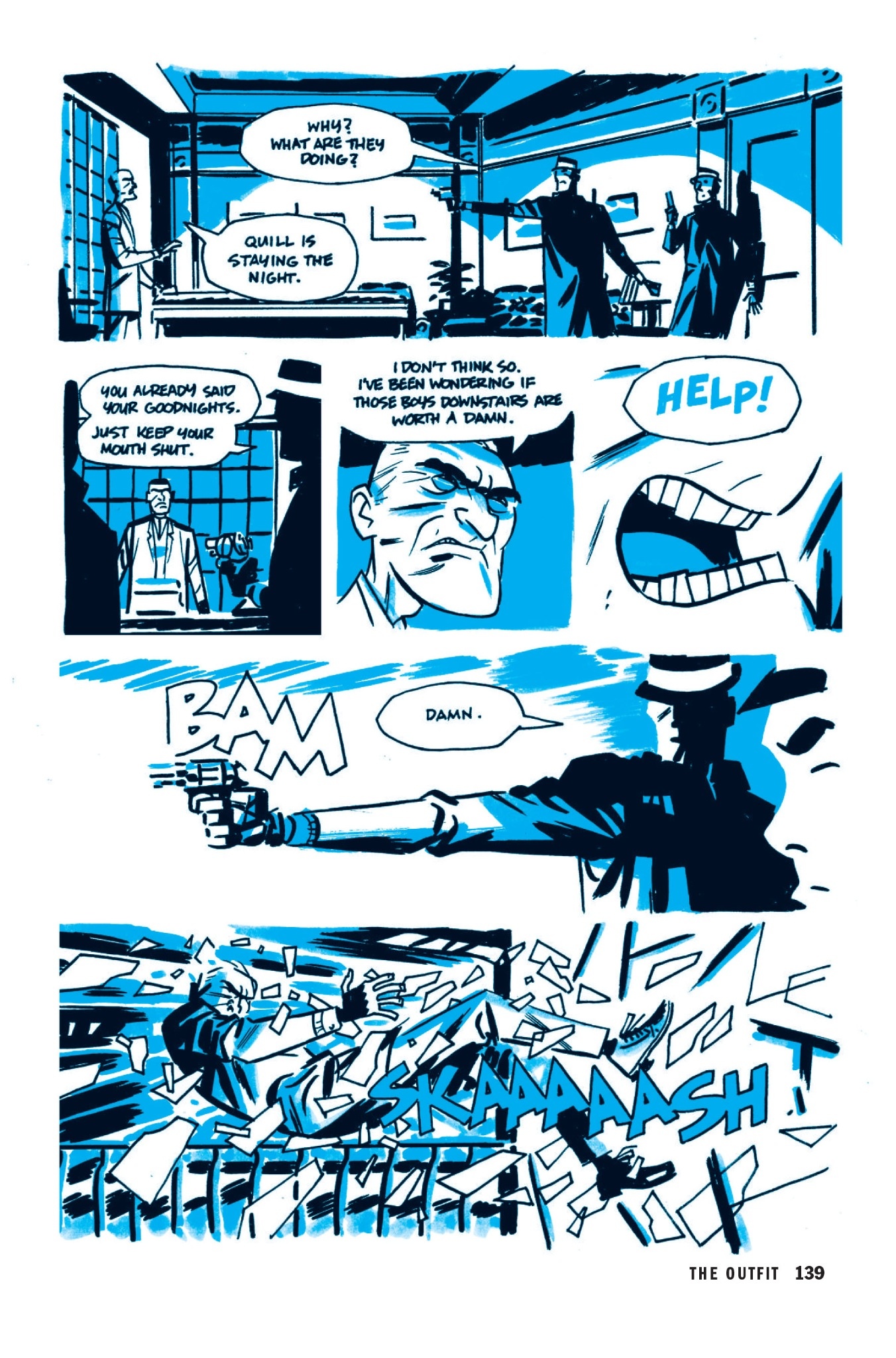 Westlake himself never definitively settled on a first name for the character, once musing "I don't know what the hell it would be, maybe Frank. No mention is ever made of Parker's family. While the events of previous novels are frequently referred to throughout the series, very little that happened in Parker's life before his appearance in The Hunter is ever discussed.

In The Outfit , it is stated that he had been in the Army from to and had been given a bad conduct discharge for blackmarketeering. The closest Westlake has ever come to alluding to Parker's childhood is in the novel Butcher's Moon , when Parker surveys the fictional city of Tyler and thinks to himself that it is a very different place from where he grew up. As well, in The Sour Lemon Score , it's mentioned that Parker was "born and raised in cities", but no further details are offered. In The Outfit Parker does state he had already been a thief for 18 years, and refers to a heist he committed in In Chapter 3 of The Man With the Getaway Face it is mentioned that Parker "owned a couple parking lots and gas stations around the country".

He has virtually no involvement with the operation of these businesses, allowing the managers to skim profits in exchange for creating the appearance of Parker having a legitimate source of income to avoid suspicion from " internal revenue beagles ". In Parker's world there is no good or evil , but simply different styles of crime. There is no law, so Parker cannot be caught, but merely injured or delayed. The subversive implication is not that crime pays, but that all business is crime. Among the Homeric epithets that follow Parker from book to book is: 'He had to be a businessman of some kind.

The way he looked, big and square and hard, it had to be a tough and competitive business; used cars maybe, or jukeboxes. He has no interest in society except as a given, like the weather, and none in power. He is a freebooter who acquires money in order to buy himself periods of vegetative quiet. Contrary to what Sante says, Parker was arrested and imprisoned twice in the series — first in The Hunter for vagrancy, then much later, in Breakout after a heist goes wrong. In both cases, his real identity wasn't known to the authorities at the time of arrest, and he escaped both times from facilities with relatively low security.

However, Parker's always very aware that the law is out there, and that his fingerprints are linked to the murder of a guard at a prison camp -- which means that he has no chance of ever being released if caught and properly identified. In the original version of The Hunter submitted to publishers, Parker was stopped by the police at the end, and killed trying to escape.

Bucklin Moon, an editor for Pocket Books, said he'd buy the novel, on condition that Parker got away, so that he could appear in a series of books, instead of just one.


But Parker is by no means merely evil , merciless or insane ; the brilliance of the books lies in their blurring of the distinction between madness and sanity , justice and mercy. Parker is not so much sick as blank, with the deep blankness of Westlake used the same structure for many the Parker novels, a method that Library Review described as "clever. Each book is divided into four sections of roughly equal length, subdivided into shorter chapters.

Excellent adaptation of the novel. Yeah, I know it's a graphic novel, I was being sarcastic. Jan 17, Kris rated it it was amazing. This story picks up not to long after the first story, The Hunter, had ended and it continues the story of Parker's run in with the Outfit. Parker has gone back to his life of resorts and rich women after he had gotten plastic surgery to change his looks when an Outfit hit man tries to take him out. This sets off a series of things as Parker has to "convince" the Outfit to leave him alone. What is really great about this story is that as you follow Parker through his plan to get the Outfit off his back there is a great set of side stories that come up about other "pros" who are hitting the Outfit at Parker's request.

This to me really amped up the story and got me that much more involved in what was going on.

The various "jobs" that are done and how they are done becomes almost more fun for me to read then the main story line, which has it's own unique and enjoyable twists. This book really builds on what was done with the first book and not only repeats what was right in that book but adds more that is new and fun in this universe. This is really stellar story telling. Pithy review - Oceans 11 with real bad guys. Judgment of the Mob Alright Imma keep this review short so I can continue reading the rest of the series.

The Hunter is a book that gets better as I think about it.

I immediately jumped into this 2nd volume excited to see Parker reign hell of the mob. It started out semi strong and then turned into a snooze fest. The first 2 parts or so served as an entertaining heist. As soon as Parker starts trying to take down the Outfit, this book became a confusing and frankly pretty boring read. Every few Judgment of the Mob Alright Imma keep this review short so I can continue reading the rest of the series.

Every few pages random names are just thrown around with no other information.

But not in the case of this book. I do however really like the character of Grofield. There is a series of short stories that completely interrupt the flow of the story. I just found them so uninteresting and was begging for the already dry main story to continue.